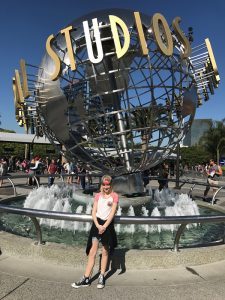 Once on the plane Mackenzie snagged a window seat, she was so excited to fly because she hadn’t been on a plane since she was three years old. The trip to California was long, but looking out the window kept her entertained. When Mackenzie arrived at her hotel room she found a welcome basket filled with various cosmetics. Her mother said, “It was a sweet surprise for Mackenzie, a self-proclaimed make-up lover, she was so excited!”

Mackenzie’s mom reminisced they had planned every day to be jam-packed with activities. She explained they would most likely never take a family trip to California again, so it was important to do everything they wanted to do! While they were there they hit up every tourist hot spot. They walked the Walk of Fame, took a Hollywood tour of celebrity houses, went to
Universal Studios Hollywood and visited the Santa Monica Pier. 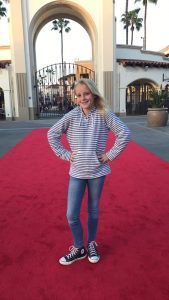 When reflecting on Mackenzie’s Dream trip to Hollywood, California, her mother said, “At first, I was hesitant to accept that she would be receiving the gift of this Dream, but then I thought, ‘She has been through a lot in her life due to her kidney transplant, and she deserves this dream of a lifetime.’ Receiving this Dream meant a lot to us as a family and to Mackenzie.”
Making Dreams come true, like Mackenzie’s, would not be possible without our partner,
We Promise Foundation.

Making Dreams come true, like Mackenzie’s, would not be possible without our partner,
We Promise Foundation.