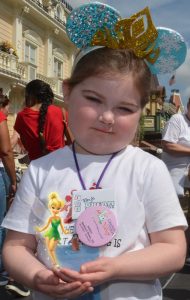 Adalyn is a warrior princess. When she was referred to Toby’s Dream Foundation she had just been handed a harsh diagnosis. Addy had been diagnosed 2 weeks prior to her interview, with a highly aggressive and difficult to treat, form of cancer. However, that didn’t stop her. This vivacious little warrior princess knew exactly what she wanted to do for her Dream. She wanted to go to Disney to meet the princesses! She was so excited to go to Disney and already had a running list of her favorite princesses she wanted to meet! 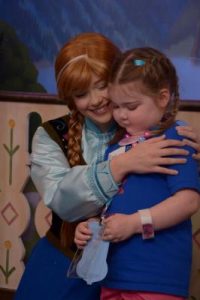 It was the first time Addy and her sister had ever been on an airplane and her mother stated that they both did great. Addy’s mom laughed reminiscing how Addy watched the seat belt sign and followed the instructions when the “fasten seat belts” sign turned on and off! Addy also passed the time by watching a movie on her tablet. Luckily, it is a short flight to Orlando and once they landed it was time for fun in the land of magic! 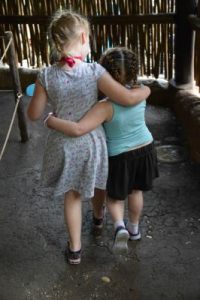 Addy’s mother reflected that it was hard to pinpoint just one highlight of Addy’s trip, but perhaps if she had to think of one thing it would be Addy meeting her two favorite princesses, Ana from Frozen and Merida from Brave. Another highlight was wearing her special Blue Genie Pass to hop to the front of the lines for all the rides and meet and greets with the characters. Addy’s mom exclaimed, “She filled up one and a half autograph books with her favorite character signatures! It was incredible.” Addy also loved the dolphin encounter at Sea World, the fireworks at Epcot, swimming at Give Kids the World Village, and ice cream for breakfast a treat we suggest to all of our Dream Kids! 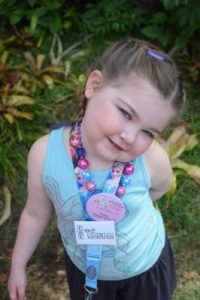 The best part of Addy’s trip? Addy felt good! Her mother noted, when it came to squeezing all they could out of their trip, Addy “held her own”! An emotional moment for Addy’s mother was watching Addy’s star get added to the star tower at Give Kids the World Village, “We are a normal family and, from the outside, Addy doesn’t look sick. It has been hard for us as a family to accept gifts, but receiving this Dream means the world to us.”

Toby’s Dream Foundation is overjoyed that Addy felt good on her trip and that we, along with our partner We Promise Foundation, can provide our children experiences that allow them to continue believing in the possibility of a moment unencumbered and a life full of hope. 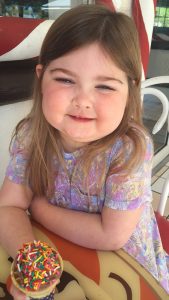 Toby’s Dream Foundation is overjoyed that Addy felt good on her trip and that we, along with our partner We Promise Foundation, can provide our children experiences that allow them to continue believing in the possibility of a moment unencumbered and a life full of hope.